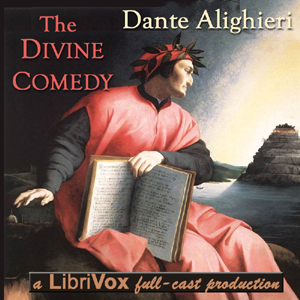 To commemorate Dante Alighieri’s 750th anniversary, LibriVox produced a special full-cast recording of his Divine Comedy in English translation: 38 volunteers read one or more roles in this epic poem, and I’m one of them. It sounds like we were all in a room together, but in truth it was recorded by individuals from all over the world and edited together afterwards. The end-result is awesome. You’ll have to put up with me as the voice of Virgil, though – yes, a woman reading a man’s part. Most of LibriVox’s ‚dramatic’ recordings have so-called ‚gender-neutral’ casting, especially for the minor characters. And is that really such a problem? In this case, no man could be found to read the part, after more than a year. Dante and Beatrice were however read by a man and a woman, respectively – and they are brilliant.

The Divine Comedy (…) is an epic poem written by Dante Alighieri in the first decades of the 14th Century, during his exile from his native Florence. Considered the most important work of Italian literature, the poem has also has enormous historical influence on western literature and culture more generally. Dante represents the three realms of the afterlife in his three canticles (Inferno–Hell; Purgatorio–Purgatory; Paradiso–Paradise). (…) The poem is written in the first person, and tells of Dante’s journey through the three realms of the dead, lasting from the night before Good Friday to the Wednesday after Easter in the spring of 1300. The Roman poet Virgil guides him through Hell and Purgatory; Beatrice, Dante’s ideal woman, guides him through Heaven. (Summary by Mary J)